After many wars, and plenty of mass shootings, one of the few silver linings is that we have learned some things about helping injured people to survive. When I started my emergency medicine residency, the ABCs (airway, breathing, circulation) were never questioned. Now we acknowledge that aerating blood free lungs is pointless.

The acronym “MARCH” stands for Massive hemorrhage, Airway, Respiration, Circulation, Hypothermia and is being used more and more frequently nowadays, with heavy emphasis placed on the “M”. If massive hemorrhage isn’t addressed quickly, it’s hard moving to “A.” The emphasis on rapid bleeding control has led to development of a wide variety of devices, hemostatic agents, infusions and techniques, along with numerous simulation devices and “Stop-the-Bleed” trainings.

When considering which of these innovations to adopt, it is useful to consider vantage points. If you are a general watching from your horse on a hilltop, a medic saving lives under fire, a foot solider on the frontlines, a civilian police officer, a teacher or a student in a classroom, your calamity preparation choices may differ. Costs and opportunity costs, along with probabilities Vs. possibilities should be considered. The best ways to stop bleeding in civilian settings like malls, schools or airports may differ from those used on battlefields.

The following questions/answers are meant to understand the “Why?”
for the Slishman Pressure Wrap.

The untrained. No matter how much effort is put into public awareness and training to stop bleeding, it is often terrified, untrained, first responders who are first on scene; especially in civilian settings. Trained or untrained first responders, or victims themselves, shouldn’t have to differentiate between arterial Vs. venous bleeding. And hours of training shouldn’t be required for use. Simplicity is critical.

The Slishman Pressure Wrap is easy to apply by seasoned professionals, untrained civilians and even children.

Survival improves the faster bleeding control devices are used after bleeding begins. Therefore, easy self-application is critical, because victims are always the closest first responders to themselves. As product weight, size, packability, complexity, and cost go down, likelihood for EDC (every day carry) and proximity to bleeding goes up. Multi-utility also improves likelihood for EDC and proximity to injuries. The Slishman Pressure Wrap weights 1.2 ounces and 2.7 in its pouch. It is 1.6” x 4” x 1”, is very flexible and can be greatly compressed. And there are numerous medical and non-medical uses for the product that are completely unrelated to bleeding.

Average time to bleed out

The optimal pressure for bleeding control is when bleeding stops, and nothing more. Any additional pressure above and beyond hemostasis increases pain and tissue damage unnecessarily. While rapid hemostasis is the highest priority for saving a life, comfort matters and is directly related to morbidity and long-term pain/disability.

The hooks under the label of the wrap allow essentially infinite adjustability, so the process of application as well as removal can be finely tuned.

Patient care does not stop when bleeding stops. Following hemostasis, vasospasm and clotting reduce the pressure required. Pain associated with limb ischemia as well as skin pinch should be considered, rather than ignored and handed off to future caregivers. Fine adjustability of the Slishman Pressure Wrap can minimize pain and tissue damage, and can facilitate gentle and controlled eventual removal.

First responders shouldn’t have to choose between small, medium and large. One size should fit all … babies, cats, dogs, and rhinos included. And even if your rhino keeps bleeding, direct pressure will still help. No limb is too small for the Slishman Pressure Wrap. Fully stretched, it reaches 10 feet, so even for larger limbs, one size fits darn near all… and a second placed on top of the first will cover the rest.

While it makes sense for bleeding control devices to be single use when bloodied, users shouldn’t fear damaging their preferred devices with a bit of practice. Damage should not render a device useless either. The Slishman Pressure Wrap works under water, in snow, sand and mud, and will still work even if the elastic is torn half way through. Even with prolonged sun exposure and lost elasticity, direct pressure will still be possible. No need to fear sudden catastrophic failure with malfunction, as is the case for many bleeding control devices.

Fine motor dexterity should not be required for use of any bleeding control device. Plastic wrappers slow application.  And lengthy written instructions are unlikely to be read, while potentially slowing treatment. Use should be inherently obvious. No need to tear wrappers or twist or even read instructions to use the Slishman Pressure Wrap. Just loop, pull, wrap, assess and reassess. 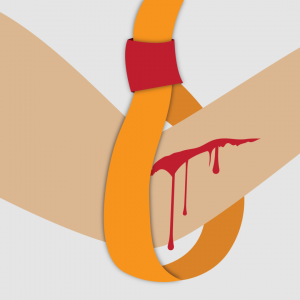 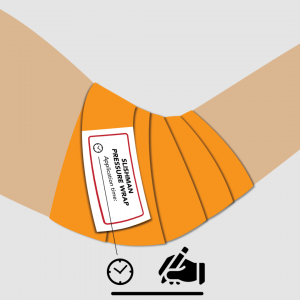 General. Any device that offers multiple medical and non-medical uses is preferable. Use the Slishman Pressure Wrap to splint fractures or sprains. Wrap around damaged boot buckles to hold them in place. Wrap around limbs to further protect from the cold. Wrap loosely over soaked gauze to comfort burns. Hold SAM Splints in place. Tie skis together. Use as a leash for dogs, cats or even as a surf leash. The list of alternative uses is enormous.

For one, a “wrap” is less of a barrier to use. Because of protocols stating “tourniquets should be left in place until received by facilities equipped to care for trauma”, by avoiding the word, first responders may be less anxious to use the product. Simply wrap to hemostasis, then back off for pain control. The word “wrap” under promises and over delivers.

No. The Slishman Pressure Wrap offers exceptional bang for buck for seasoned soldiers and medical professionals, as well as the untrained public.